The Pennsylvania law firm Kraemer Manes  recruited its non-client employees, friends, and family members to post dozens of phony 5-star reviews on Facebook and Google in a campaign to trick potential clients to hire the firm, according to a malpractice lawsuit. Employees were paid off with extra time off, according to the suit.

Working with a former firm employee, the plaintiff identified 60 specific examples of phony reviews written by paralegals, the office manager, the communications director, and other non-clients, according to the complaint by ex-client Tabatha Wolfe. Working over a six-year period, the law firm's founding partner manufactured the glowing fake reviews, using "blitzes" when he directed its employees to solicit a large number of five-star reviews in short time periods, she charged.

Kraemer Manes "orchestrated a scheme of soliciting positive online reviews" from people who had never used the law firm's services, the complaint charges.

Making things worse, Wolfe wrote a damning, 1-star review on Google, stating "BEWARE!! Take it from a legitimate client who hired this so called law firm. Don't do it. Their practices are deplorable. ... Please, if you care about what you're fighting for, find someone else!"

Fortunately for the firm, the case just settled and the review cannot be found.

The case arrived at a time when law firms have discovered the potency of law firm reviews to attract new business:

In the instant case, the law firm said that Wolfe's review was "demonstrably false" and defamatory. It demanded that she immediately remove her post and threatened to sue her. In a weak defense of the lawsuit, the firm said it cannot be responsible for what other people say about it online, and that Wolfe had no damages. 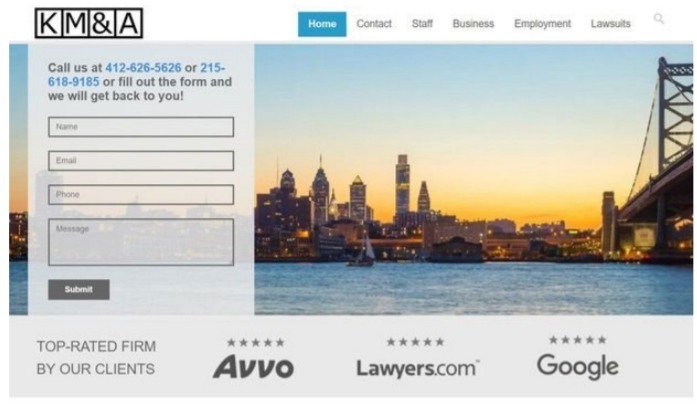 However, the firm dropped a promotion on its website in January that touted the firm as a "Top-rated Firm By Our Clients." Meanwhile, its Facebook page currently lists 102 5-star reviews, and Google says the firm has 131 reviews, averaging 4.3 out of 5 stars.

Duped into hiring the firm

KM&A is an employment law firm with offices in Pittsburgh, Cranberry, Philadelphia, and King of Prussia offices.

Tabatha Wolfe filed the class-action lawsuit against the firm, the founding partner and an associate on December 11, 2018. Case No. GD-18-016480 in the Court of Common Pleas of Allegheny County, Pennsylvania.

Wolfe retained the firm in December 2016 to handle a sexual harassment claim against her former employer. She said she relied on KM&A's reviews, and that but for the reviews, she would not have contacted the firm. According to Wolfe, the firm missed a December 2016 filing deadline with the EEOC which "completely destroyed my case." She ended the attorney-client relationship on February 12, 2017.

She brought the case on behalf of a potential class of 3,000 clients represented by KM&A who were "fraudulently deceived by false advertising" purported to be written by former clients.

The level of detail in the complaint is convincing. It alleges:

The lawsuit also alleges that "Defendants orchestrated multiple marketing blitzes for the purpose of
fraudulently creating a media presence of reviews from employees and other individuals who
were not clients of their legal services." The complaint cites clusters of reviews by employees and their family and friends:

The nightmare for the firm is over, as Wolfe filed a notice of settlement on August 8, 2019.