Just Did My First Periscope Livecast -- Got 193 Viewers 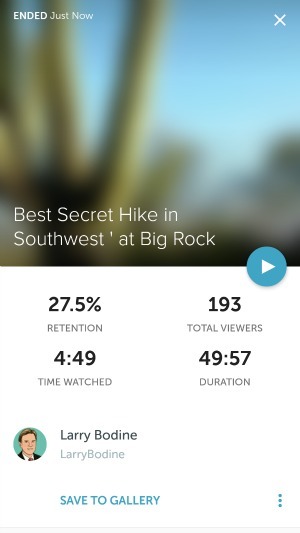 I just did my first livestreaming broadcast on Periscope today and attracted 193 viewers. After listening to livestreaming pioneers like Mitch Jackson and Nancy Myrland I took my Samsung Galaxy 5 outdoors and joined the live broadcasting movement. It's interactive and a lot of fun.

The subject was my favorite hike on the Finger Rock Trail in Tucson, AZ. The recording was online only for 24 hours, so there is no way to see it now, which is a disadvantage of Periscope

While I was broadcasting, the viewers would send streams of hearts every time I showed a Saguaro cactus. Many sent questions about where I was, asking if I was in Africa. The interactivity of the questions and check-ins made the livecast a lot of fun. It was 74 degrees and sunny in Tucson, and I aimed to send some Southwestern sunshine to everyone in New York, Chicago and Seattle.

The point is that if I can do it on my first try, so can anyone. Here's how: download the Periscope app to your cell phone, open it and click "Start Broadcast."

How would you use it for law firm marketing? Livecast your next speech, livecast the next event you attend, livecast about your practice.

I will be livecasting live from The National Trial Lawyers Summit from Feb. 7-10. Follow my future broadcasts at https://www.periscope.tv/LarryBodine or just follow me on Twitter at @LarryBodine and you'll catch all the highights.