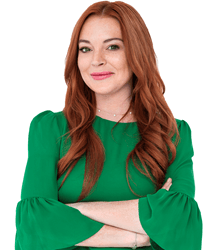 Joking about her past DUIs, actress Lindsay Lohan is the new spokesperson for legal directory and lawyer-matching service Lawyer.com. In exchange for a substantial stock option, she will advise company management on raising awareness and recording videos.

"When Lawyer.com first reached out to me, I was confused and a little scared, because I thought I was in trouble," she says in one video. "Lawyer.com is just about helping people. From getting a DUI -- let's not pretend I didn't get one, or two, or three..."

Founded in 2009, Lawyer.com has a database of nearly 2 million attorneys. Based in Basking Ridge, NJ, and Easton, PA, the directory accepts payment in Bitcoin.

Consumers can call a toll-free number or complete an online form, where they state their legal issue, and they will be contacted by lawyers in the database.

Lohan shared her own experience with the platform, commenting, "I've used Lawyer.com for business ventures and found the response time and Lawyer selection amazing. Calling or completing a form is so simple and it's free!"

Lohan, age 31, currently performs in and co-writes the UK sitcom, Sick Note. She is an advocate of drug abuses causes and women's rights. She became known for her roles in the movies Parent Trap, Freaky Friday and Mean Girls.

May 26, 2007 - Is arrested in a Beverly Hills car accident and charged with DUI, possession of cocaine, and misdemeanor hit and run.

July 24, 2007 - Is arrested in Santa Monica, California, on DUI charges for alcohol, possession of cocaine, transporting a narcotic into a custody facility and driving on a suspended license. Lohan is sentenced to 36 months probation, an 18 month-long alcohol education program, 10 days community service, and court-ordered rehab at the Cirque Lodge in Utah, and one day in jail.

July 6, 2010 - Is sentenced to 90 days in jail for violating probation and missing alcohol counseling sessions.

September 24, 2010 - Appears in court after failing a drug test a week earlier. Her probation is revoked, and she is jailed. The decision is later overturned, and she is released on $300,000 bail and ordered to wear a new alcohol-monitoring ankle bracelet.

January 22, 2011 - While shopping in Venice, California, she walks out of a store wearing a one-of-a-kind necklace worth $2,500. The store clerk reports the necklace missing to the LAPD. Subseequently Lohan is arraigned and booked on felony grand theft charges and later pleads no contest.

April 22, 2011 - For violating the 2007 drunk driving probation Judge Stephanie Sautner sentences Lohan to 120 days in jail and 480 hours of community service, 360 hours to be served in a women's center and the remainder at the Los Angeles County morgue.

September 19, 2012 - Is arrested and charged with leaving the scene of an accident. Lohan was driving into the parking lot of the Dream Hotel in New York when she allegedly hit an employee of the restaurant next door.

November 29, 2012 - Is arrested at a club in Manhattan after an alleged altercation.