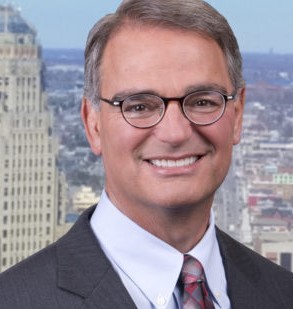 Attorney Ross Cellino, Jr. of Buffalo, NY, knew his TV advertisement was a runaway hit when people began sending videos of their children watching his commercial and adorably singing the jingle for his personal injury practice.

Inside Edition reported that singing the jingle had become the hottest new internet challenge in 2018, with all kinds of people making videos of themselves singing the tune. Broadway actress Molly Hager started the challenge with her operatic voice. Actress Katharine McPhee, then starring in the musical Waitress, took up the challenge in a duet and dance with her costar. Choruses recorded videos in three-part harmony.

You've got to see it at https://bit.ly/2OBJLdD

Cellino & Barnes commissioned the jingle for $500 in 1992, when the firm was unknown outside of Buffalo. “Over time it became a central part of our identity, and remains so to this day,” says Cellino's partner, Stephen E. Barnes, a 1983 grad of the University of Buffalo School of Law.

“The jingle is an earworm, it gets in your head and doesn't go away. It's been well-received. Kids absolutely love the jingle. Some day when they grow up, they could be our clients,” Cellino says.

The jingle was a bargain, but when it came to buying the 800-888-8888, number, the attorneys spent $1.7 million. “'Just call 8'” was a very good investment. It made it easier for the average person to the street to remember your phone number. Seven digits are hard for the average client to remember,” Cellino says.

Today Cellino & Barnes has 55 attorneys and 160 staff in 6 offices (2 in Buffalo, 2 on Long Island and one each in Manhattan and Rochester). A combination of top-of-mind awareness, the jingle, a likable brand, and the ability to get results has propelled the law firm into a business that grosses $170 million a year, producing $57 million in profits.

Cellino & Barnes has recovered more than $2 billion in settlements and verdicts for its clients since 1999. “It's important to tell people that you can get verdicts and settlements,” Cellino says. “But you also have to let people know you're a real person.”

Cellino's father, Ross Sr. founded the law firm in 1958 and it grew to four lawyers handling criminal law, estates, personal injury, corporate and real estate matters. Ross Jr. graduated from the University of Buffalo School of Law in 1982 and used an office at his Dad's firm to start his own practice.

The partners admired that Ross Jr. was working until 10 pm, and invited him to join what became Cellino Bernstein and Cellino in 1986.

Ross Sr. retired in 1992. Steve Barnes had just joined the firm the prior year, after serving as an officer in the Marine Corps during the first Operation Desert Storm in Iraq.

They made a crucial decision. “Steve and I were about the same age and got along. We analyzed the current practice and revenue stream,” Cellino says. “We found that personal injury litigation outweighed criminal and estate work. We said, ‘Why don't we focus on that?”

A key break for the young lawyers was the opportunity to take over the files from a PI attorney who died. Cellino & Barnes paid the estate 1/3 of the value of the cases.

“Number one, you got better at trying cases and getting good results,” Cellino says. “People learned about that, the word got out and our practice grew organically.

Then the lawyers decided to really step on the gas by marketing themselves affirmatively on TV, billboards, and radio. “I told Steve that we're getting good results and I don't win to wait until I'm 70 until people know about it.”

Two major cases illustrated the firm's effectiveness. Cellino represented an 87-year old pedestrian who was hit by a tractor-trailer. He could no longer walk and had to go into a nursing home. The insurance company offered only $50,000 “because he's 87 and not going to live that long.”

“My reply was that it costs $50,000 to live in a nursing home, and I want four times that: $200,000,” Cellino says. Six months later the case went to trial and the defense counsel said he had $200,000 to settle the case. “I told the judge they were supposed to give us that 6 months ago. I got a $1.1 million verdict in four days. Afterward, the judge noted that the previous trial on his docket took six months and resulted in a $4.5 million verdict. “I'll go with Cellino,” the judge said.

In another celebrated case, Cellino represented a first-year law student who suffered a brain injury in a horrific crash. The insurance company took a hard line and said he had no conscious pain and suffering, and offered to settle for $5 million. “He would have been a lawyer earning good money, he had lost wages and medical expenses,” Cellino recalled. “I took it to the jury and recovered $47.4 million.

“Those successes allowed us to say that we're young, but we're pretty good at what we do.”

Cellino did two things to supercharge the growth of the firm. First, he sought out the advice of New Orleans lawyer Morris Bart, who has been a successful PI lawyer for 35 years. He pioneered lawyer marketing and was the first attorney in Louisiana to advertise.

Bart's firm has grown into one of the largest personal injury law firms in the US with more than 100 attorneys, a support staff of more than 150 and an annual advertising budget in excess of $10 million.

“He gave us marketing ideas and management ideas like giving every non-partner in our firm a percentage of their recoveries. This makes them more aggressive and aligns their interests with the client.”

Secondly, Cellino also got inspiration from motivational speaker Tony Robbins. “When I'd be on long drives, I would listen to his tapes to stay awake. What I follow to a “T” is that to be successful, you can model yourself after someone else who has already developed successful techniques,” Cellino says. “You can learn what your model took 20-30 years to learn in only 6 months.”

Today 60% of Cellino & Barnes cases are auto collisions with a car or a truck. Another 10-15% are slip and fall cases, plus 2,000 mass tort cases. The firm takes a limited number of medical malpractice cases and even has a medical doctor on staff working on those cases. Lastly, the firm takes labor law cases, for example, where a worker falls from scaffolding.

Cellino, age 52, says he spends 99% of his time in the office and tries one or two cases per year, to be fresh in the courtroom. He works with new lawyers “and I can predict within 5 minutes how well they'll be in front of a jury.”

Key traits Cellino looks for in employee lawyers is being able to relate to a jury and the average person on the street. “This is more important than an ivy league education.” He also wants to see a drive to succeed.

Success has been good to Cellino, who has reaped $10 million in annual personal income from the firm since 2016. This allows him to have several side businesses including a tree farm, a 250-acre golf course, a heavy equipment business, and a billboard business. The partners own several billboards in key locations, and Cellino owns another 5 billboards with his own company.

To this end, Cellino & Barnes have built up goodwill in the community by donating $1 million to their law school alma mater at the University of Buffalo. Their gift created the Cellino & Barnes Conference Center, and it was one of the largest cash ifs the law school has received.

On his own, Cellino supports the Society for the Prevention of Cruelty to Animals. In one video he says, “if your family is like mine, pets are important. So please join us in helping animals find their forever home.” There is no promo of the law firm, but it instead calls attention to CellinoSPCA.org.

He also has given away a total of $800,000 for scholarships to high school kids in inner-city classrooms. During the 16 weeks of the football season, he also shows up in classrooms to deliver $250 checks for primary school teachers to buy supplies. “In the classrooms, there would be 5-year-old kids, and they would sing the jingle and write me thank-you notes.”

Several warm, homespun videos portray him and his wife Ann Marie, a retired corporate lawyer, in their cozy home. Included are his 3 sons (Tim, a workers comp lawyers in Boston, Ross III, an accountant at Ernst & Young in New York and Samuel who is a corrections officer in New York) and three daughters (Brigitte who works for the Erie County District Attorney, and Annmarie and Jeanna who started their own law firm 5 years ago. All the attorneys went to the University of Buffalo law school.

Cellino has 8 grandchildren and still drives them to school in the morning. “I drive a Toyota minivan, I don't drive a Ferrari,” he said.

Carefully venturing into humor, Cellino has a video of him with Thurman Thomas, a running back for the Buffalo Bills and Miami Dolphins who was elected to the Pro Football Hall of Fame in 2007. The spots support Thurman Thomas's Family Foundation.

In one 30-second spot, Cellino and Thomas are watching a football game on TV with beers. Thomas says, “It's tough on the players too. Imagine trying to do your job in front of all these people, and someone's judging you.” Ross responds, “I have some idea of what you're talking about.” Thurman says, “Football players can't just yell ‘objection!'” Cellino says, “Overruled!” Thurman says, “You're in contempt!”

In another, Cellino and Thomas are also watching football on TV. Cellino, an inveterate Bills fan, says, “Let me ask you a question. When you run a trips right formation with the X receiver in motion, what was the blocking response of the wide receiver and who was the primary hot lead?” Faced with this jargon, Thurman looks at him with a quizzical face and says, “Why don't I just sign a jersey for you.”

In conclusion, Cellino says, “I want to show the public who I am as a person. I'm supporting the Marine's fundraiser Toys for Tots.” The program distributes toys to children whose parents cannot afford to buy them gifts for Christmas. “I'm doing a video for the SPCA – not pitching me as a lawyer, but showing I'm here to support the local community.”