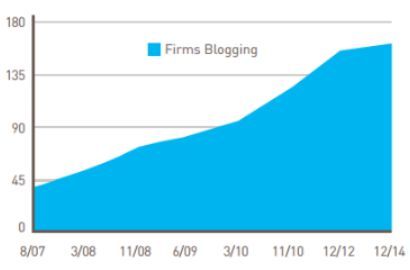 Law firms nationwide are adopting content marketing at rapid rates, evidenced by the increase in attorney-authored blogs, according to the new Am Law 200 Blog Benchmark Report 2015.

The LexBlog research team studied each Am Law 200 firm's individual web presence and their 962 unique blogs. They found that 163 firms, or 82 percent of the 2014 Am Law 200 are embracing blogs as part of their marketing efforts.

According to LexBlog's fascinating report, the top three Am Law 200 blogs by traffic are:

The first two are not officially branded by the firm while Joe Wallin's Startup Law Blog, which does carry some Davis Wright Tremaine branding and is promoted on their website, is largely different from the rest of the firm's blogs.

"In each of these instances, the lawyers writing these publications have, in a way, freed themselves from the shackles that come with blogging under the firm's umbrella," the report says the.

Which firms host the most?

What are the most popular blog topics?

However, only 20 percent are making use of responsive design, Google's preferred method of delivering the mobile experience. "Although 41 percent of Am Law 200 blogs have a “mobile version,” in which the site delivers a different version of the site when it detects use of a mobile device, Google still considers this an inferior offering," the report says.