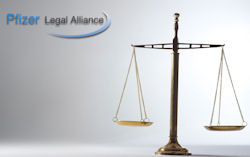 The Pfizer Legal Alliance (PLA) was created in 2009, as a "partnership" between Pfizer and law firms aimed to transform the way legal services are delivered and valued.

The emails and phone calls that came in response to my post Pfizer Learns that Cost-Saving Legal Program Leads to Billions in Liability revealed a deep well of resentment by lawyers against Pfizer. The company exploited its power in the marketplace pay as little as possible to its litigators.

All the while Pfizer touted its now-failed Legal Alliance Program online as "collaboration and a focus on relationships."

Amusingly, there was backchat on Twitter from a clique of consultants carrying water for Pfizer. They couldn't believe that the panel law firms actually lost the headline-making cases. Or if they did lose the cases, they couldn't see a connection with Pfizer's tightfisted program. The Pfizer program was supposed to "produce better legal outcomes and cost savings."

The "alliance" program produced a record-setting collection of disasters in court. According to CorpCounsel.com, the Legal Alliance Program is in disarray and the in-house lawyers who led it have been sacked. Apparently the short-term savings of legal fees were not worth the cost in jury awards and fines.

Perhaps the facts were bad in the cases that led to jury verdicts and fines. If so, there sure were a lot of bad facts in a lot of cases. There were so many bad facts it appears that Pfizer ordered its panel firms to try the cases it knew they would lose. This raises the question: would a law firm cut corners if it were ordered to take discounted fees and try a losing case? I am told by a reputable source that shortchanged law firms "downstreamed" the litigation to less-capable "C" level lawyers.

What never made sense was a dysfunctional corporate program that chiseled down the fees of law firms, and then assigned them to litigate major-liability cases. The list of the 15 panel law firms -- the "value champions" -- is on the site of the Association of Corporate Counsel. Here's a partial list of the headline-making cases and the Pfizer panel firms that lost them.