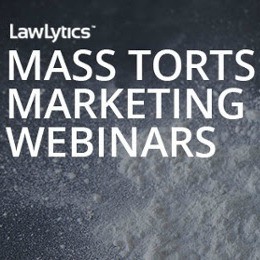 Lake, of Gacovino Lake & Associates of Sayville, NY, identified mass tort cases that are heading toward settlement, and others where a recovery for plaintiffs is remote. Some 175 attendees are gathering in Nashville for the Personal Injury Lawyers Marketing and Management Association Summit, which features 30 presenters, 26 speakers, and 36 exhibitors.

The FDA approved the drug in 2011 for patients with a heart rhythm disorder known as atrial fibrillation and to treat the risk of deep vein thrombosis and pulmonary embolisms. There is no antidote to Xarelto and plaintiffs allege that the drug causes uncontrollable internal bleeding, strokes, blood clots and death. The plaintiffs also charge that the manufacturers failed to warn users and actually concealed the fact that Xarelto causes uncontrolled internal bleeding.

“So far there is no success at trial in both the MDL and California state courts,” Lake said. “The general belief is that this phase is still a strong candidate for a global settlement, but it needs a favorable verdict.”

Juries in the US Eastern District of Louisiana returned defense verdicts on May 3, June 12 and August 21 this year. A total of 18,561 cases are filed in the multidistrict litigation docket, MDL 2592, before U.S. District Judge Eldon E. Fallon

“It's expensive to acquire clients in these cases,” Lake added.

“Trials have been wildly successful in St. Louis at the state court level,” Lake says. “There are some challenges to jurisdiction for cases involving non-Missouri residents, but currently, it's believed there is a legitimate basis to remain in state court.”

A jury in Los Angeles awarded $417 million on August 21 to a 63-year-old woman who developed ovarian cancer after using the Johnson & Johnson's talc-based products like Johnson's Baby Powder for feminine hygiene.

Plaintiffs assert that other talcum powder manufacturers have added a warning, but that Johnson & Johnson knew about connection between ovarian cancer and talc, but never placed a warning on its Baby Powder.

878 cases have been filed against J&J in mass tort litigation before US District Judge Freda L. Wolfson in New Jersey in MDL 2738, where discovery is proceeding.

“All in all, based on the trial results and some favorable state jurisdictions, we believe this is a strong tort,” Lake says.

The chemotherapy drug Taxotere, is given to patients with breast cancer and it has been linked to permanent, disfiguring hair loss. There are 1,624 cases filed against the makers of Taxotere in MDL 2740, before US District Judge Kurt D. Engelhardt in MDL 2740 in the Eastern District of Louisiana. Taxotere has been a blockbuster drug for its maker, Sanofi-Aventis. Sales of Taxotere went as high as $3.1 billion in 2010.

“We think that there is a strong jury appeal on these matters,” Lake says.  “The plaintiffs have been put through the indignity of mastectomy and possibly worse. They feel compromised as women, and then suffer permanent hair loss. The cases are very sad.”

IVC filters are implanted into the inferior vena cava – the body's largest blood vessel – to intercept blood clots before they can travel to the heart and lungs. Plaintiffs pursuing IVC filter lawsuits against C.R. Bard and Cook Medical claim that the companies failed to provide doctors with adequate warnings and instructions for removal. They also assert that the devices are defectively designed, and accuse the two companies of concealing the risks associated with their blood clot filters.

Cook Medical is a defendant in 2,650 product liability claims involving its Gunther Tulip and Celect IVC filter blood clot filters. The cases are pending before US District Chief Judge Richard L. Young in MDL 2570 in the Southern District of Indiana.

Bard's IVC filters, including its Recovery, G2, Meridian, and Denali product lines, are the target of 2,563 product liability claims. The cases are pending before US District Judge David G. Campbell in MDL 2641 in the District of Arizona.

“This is a well-developed litigation,” he added. “There have been settlement discussions last summer but didn't result in any actual settlements. There are still a lot of cases out there to get -- simple cat scan will show if it the filter fractured or migrated.”

There has been a spike in mass tort litigation caused by the Johnson & Johnson medication, Risperdal, an anti-psychotic drug used to treat schizophrenia and other psychiatric disorders. Plaintiffs allege that the drug causes breast tissue growth in young men, a condition called gynecomastia. This past year Risperdal has accounted for over a third of all mass tort lawsuits pending in the Philadelphia Complex Litigation Center.

“There have been verdicts in Philadelphia in favor of plaintiffs and defendants,” Lake says.

In February 2015, a Pennsylvania jury awarded $2.5 million in damages to a 20-year old male plaintiff who had been using Risperdal since he was eight years old. A month later at the second trial, the plaintiff was not awarded any damages. In November 2015, a separate jury in the same court awarded $1.75 million to another Risperdal user who developed breasts after taking the drug since age five. In July 2016, the largest award in Philadelphia Risperdal litigation was reached. A jury awarded a Tennessee teenager $70 million in damages after finding that Johnson & Johnson officials failed to warn that the drug could cause the plaintiff to grow breasts. Most recently, in January 2017, Johnson & Johnson entered into a pre-trial settlement days before another Philadelphia trial, a case which would have been the seventh trial about Risperdal's link to gynecomastia.

“The cases are rumored to be in settlement discussions. These cases are no longer easy to come by as the drug has been generic for a decade, and 80% of cases involve generic drugs.”

“This tort is similar to pelvic mesh in that there are multiple products,” Lake says. “The manufacturers are Ethicon, Covidien and Bardl. The stronger cases are thought to be Atrium C-Qur and Ethicon Physiomesh due to FDA recalls. However, we like all of the cases.”

The C-Qur Hernia Mesh is made by Atrium, a subsidiary of the German holding company Maquet Getinge. Plaintiffs allege that this mesh is made with polypropylene plastic that causes a rejection response when placed in the body. It causes the mesh to bind beyond the muscle wall and bind to the intestines and other organs.

A new multidistrict litigation has been established in New Hampshire, where 28 are cases filed against Atrium before US District Judge Landya B. McCafferty in MDL 2753.

“These cases are a good opportunity to acquire many cases at a reasonable cost, but again the litigation is taking shape. There are literally hundreds of thousands of potential cases, but it takes a lot of work to find a compensable claim,” Lake says.