Use Suspense to Get People to Read Your Entire Blog Post 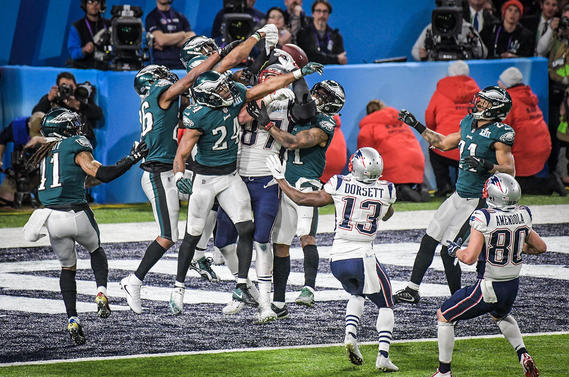 At least nine players from both Super Bowl teams jump into the air to catch the Hail Mary pass.

NOBODY skipped the final minutes of the Super Bowl because the suspense was riveting. With 2:09 left to play, New England Patriots quarterback Tom Brady fumbles the ball. The Philadelphia Eagles use the mistake to score a field goal. The score is now 41 Eagles, 33 New England with 1:03 left to play.

Brady, who is famous for come-from-behind victories, gets the ball again. All he needs to do is score a touchdown and a two-point conversion to tie up the score. This is difficult but entirely possible for him.

It is fourth-and-ten with 42 seconds left, and Brady throws a pass for a first down. “Oh Noooo!” scream Eagles fans. He throws another pass to Ron Gronkowski, who catches it for another first down. “Oh my God!!!” shriek Eagles fans. Brady is now near the 50-yard line and he has momentum. What will happen next?

With 13 seconds left he throws a long pass high into the end zone. At least nine players from both teams jump into the air to catch it.

Known as the “Comeback Kid,” Brady has pulled victory from defeat in 42 comebacks in the fourth quarter. The odds are in New England's favor. The Eagles have not won the SuperBowl, ever. New England has won the Super Bowl 5 times, winning last year's big game. Brady is a four-time Super Bowl MVP. Will he complete the Hail Mary pass?

The suspense that kept 103.4 million viewers glued to their TV sets can be used when you write blog posts, to assure that website visitors will read your material all the way to the end.

Online, writers are suffering a plague of skimmers with short attention spans. The human attention span has shortened from 12 seconds at the start of the century to 8 seconds today. Social media, texting, and emojis have short-circuited the human brain so that people don't focus when they are on the internet.

Most people skim articles online, picking out a sentence here, a key word there, jumping around an article. Website visitors only read half of the content on a web page before bouncing, according to a study by Chartbeat about Slate.com articles. 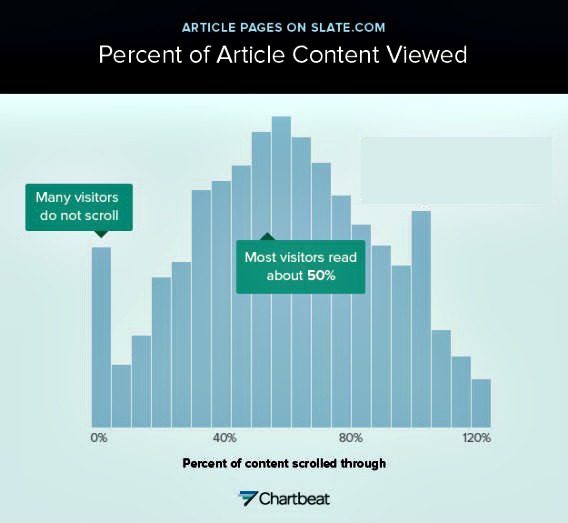 In this graph, each bar represents the share of readers who got to a particular depth in the story. There's a spike at 0 percent because 5 percent of readers never scrolled deeper than that spot. The X axis goes beyond 100 percent to include reading the comments section

Bloggers are content marketers. Deteriorating attention spans are an obstacle to producing calls to your law firm and generating new business online. But there are several things you can do about it.

Hook readers, and make them wait

First, you must start your blog post with an emotional hook. The title and headline must entice readers with something they care about -- something that makes a difference to them. Second, you don't give away the punchline at the outset, but instead reveal the answers bit by bit, so that readers must continue reading on to find out how the article ends.

For example: How do you make your family hungry? Make them wait for hours for dinner, according to Lee Child writing in the New York Times. “We should ask or imply a question at the beginning of the story, and then we should delay the answer. (Which is what I did here, and you're still reading, right?)” he says. “Readers are human, and humans seem programmed to wait for answers to questions they witness being asked.”

If you care about the question, you're definitely going to read the next paragraph. In that paragraph, set out the answer and add another question. This makes readers wait for the next answer.

For example, the paragraph in this article that starts, “Known as the “Comeback Kid…” was just padding. It was designed to make you read on to find out if the Super Bowl pass was caught.

“Like the old cartoon of the big fish eating a smaller fish eating a very small fish, you'll find out the big answer after a string of smaller drip-drip-drip answers. The big answer is parceled out slowly and parsimoniously,” Child says.

What are some other techniques?

How else can you attract twitchy readers with attention deficit disorder? Try eye candy and word candy.

We all know what eye candy is -- pictures, charts videos -- something to look at. Notice that I included a chart with this article. You can also mix things up with fonts, boldface, and italic. Be sure to include subheads and callouts in your article. Mix up the visual image of your blog post.

See how that works? Did you click the button?

You can also use the New Yorker technique of “word candy.” The New Yorker is a literary magazine with Pulitzer Prize-winning writers who can get you to read a 10,000-word article to the end. They use the technique of not inserting the “nut graf” -- or the point of the article -- until one-third of the way through, keeping readers in suspense. They also tell stories with a beginning that sets the scene, a middle that explores the topic, and an ending that makes you think. Many of the articles are profiles of people. The #1 best-read article in the New Yorker in 2017 was “Harvey Weinstein's Accusers Tell Their Stories.”

So what is “word candy?” Sorry to keep you in suspense.

This is the art of using a special, ten-dollar word when a generic word would do. A recent article mentioned “exploring the demimonde.” I stopped. Then the article used the word again!

Did “demimonde” mean “small world”? No.

I looked it up. It means “a group of people considered to be on the fringes of respectable society.” This was exactly the right word for the sentence. The writer could have said “underworld” or “edge of society.” But the intellectually-tasty choice of “demimonde” caught my attention.

These are just a few of the ways that blogger can capture a reader's attention. Writing regularly is a great technique because the more you blog, the more clients you get. Blogging day in and day out over a long time also works. My blog has gotten more than 1 million visits over the last 10 years. And using suspense to tell readers about a client in jeopardy, making them care about the person, and revealing at the end what you as an attorney did for them is a very effective technique.