What We Learn about Law Marketing from Atticus Finch 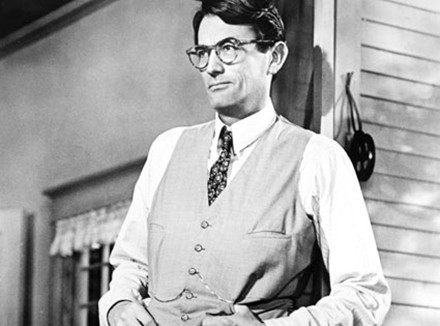 Lawyer Atticus Finch is a character in the novel To Kill a Mockingbird. Gregory Peck portrayed him in the 1962 film.

Here is an erudite guest post from Melanie Hargrave

Any lover of the classics knows that Atticus Finch from Harpedivorr Lee's To Kill a Mockingbird is one of literature's most beloved characters. He may be a fictional character, but lawyers and marketers alike can learn some essential lessons from his strengths and standards.

“You never really understand a person until you consider things from his point of view — until you climb into his skin and walk around in it.”

Atticus Finch understands human nature. He understands the people of Maycomb County better than they understand themselves, as shown by his ability to expose Bob and Mayella Ewell's ulterior motives in their prosecution of the innocent Tom Robinson.

To have a successful marketing campaign, you need to understand who your clients are going to be. Who is going to be looking for your service? How are you going to present yourself so that they will be attracted to you over another firm?

Once you step into your client's shoes, you'll better understand what they're looking for and how you can deliver the service they need.

“The one thing that doesn't abide by majority rule is a person's conscience.” Atticus is unfailingly honest. It is one of his many positive character traits that make him who he is. People trust him to (1) always do the right thing, and (2) tactfully tell them the truth. Atticus is faced with many difficult situations, including defending a case he knows he will lose, but he always follows his conscience.

Whether you're a lawyer dealing in divorce or domestic assaults, you're going to need to be honest in your dealings with your clients. If you have the same integrity in your marketing campaigns as you do in court, you'll earn a reputation as an honest, reliable firm that people will be drawn to. It won't always be easy, but like Atticus affirms, honesty is always the best policy.

Atticus Finch is nothing if not consistent. He is loyal, reliable, and, as Miss Maudie sums up so succinctly, “[Atticus] is the same in the courtroom as he is on the public streets.” It doesn't matter whether he's defending Tom Robinson or tipping his hat to Mrs. Dubois—he doesn't allow himself one face in public and another in private.

Once you choose a brand and a marketing strategy, be consistent with it. Of course, there's always room for flexibility—if you're stagnant, you'll never get anywhere in a marketing world that is in constant flux. But make sure that no matter how you update your strategy to follow demand, you always keep the core of what makes your company what it is. Choose a brand that will be recognizable, and stick with it.

“[Courage is] when you know you're licked before you begin but you begin anyway and you see through it no matter what.”

Atticus doesn't let life get him down. When he's defeated in court, he doesn't throw in the towel. He picks himself up and uses his defeat to teach both his children and the citizens of Maycomb. He is respected for his tenacity, his refusal to let his failures define him, and his ability to turn every sour moment in his family's life into a lesson to be learned.

Any business has periods of drought. When these moments come, don't quit; simply adjust your marketing strategy. Spend the money it takes to be successful, write new advertisements, get out and contact new clients, and put in extra effort to reach out. Don't let the competition, the market, or a temporary dry spell “lick” you...figure out what needs to be done and have the courage to be a little bolder and a little braver than you might normally be.

Be Passionate About What You Do

“There's a lot of ugly things in this world, son. I wish I could keep 'em all away from you. That's never possible.”

Atticus is passionate about his career choice, and that contributes to his success. He is chosen to defend Tom Robinson not only because he is a good, honest man, but because he is the best defense lawyer in Alabama. More importantly, Atticus loves the people of Maycomb more than his work. He commits himself whole-heartedly to their well-being, and lets nothing endanger the life he has created for himself and his family.

If you don't love what you do, clients will sense that, and they will search elsewhere for aid. Conversely, if you're passionate about your campaign, your firm, and your clients, people will trust you to take care of them. Let your passion come through in your marketing strategies. Don't be afraid to make promises or use decisive language, and be confident in your presentation. Marketing isn't easy, but if you follow these pointers, you'll be as respected and sought after as literature's favorite lawyer.

Melanie Hargrave loves to learn new things. She has only recently become interested in marketing, and has enjoyed learning about law from companies like Mackay and Company. She also loves spending time outdoors, reading, and being with her family.

Now I have to find and read ‘Atticus Finch’. So who’s giving me permission to publish this on a ‘law’ blog, Melanie or Larry.

I own the copyright to the published version of the blog post. Please let me know where you plan to republish it.