Personality: Why 25% of Lawyers Can't Sell 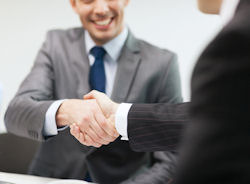 Marketers are creative, enthusiastic, extroverted and interactive. “The good news for marketing is that lawyers are a quick study—you don't have to do a lot to teach them.”

Only 20% of lawyers are natural born marketers, according to Dr. Larry Richard, Founder & Principal Consultant at LawyerBrain LLC. He found that an additional 55% of lawyers can learn to be rainmakers.

“They will make efforts to do marketing; so your goal should be to reduce their discomforts,” he said. The remaining 25% are hopeless at marketing and should be ignored. “The trick is to figure out who they are and not to waste time on them,” he said.

“Personality is a key factor in business development,” Richard emphasized. Lawyers are very different from general population in 6 of 18 traits – and no other profession has more than 2 deviations. For example, 2/3 of lawyers are introverts, but in contrast, ¾ of the general population in the U.S.are extroverts. In analyzing lawyer personalities, Richard employs the Caliper Profile, which has been used for more than 40 years to measure 18 different personality traits.

Further, lawyers differ dramatically from marketers. Lawyers are analytical, detached, introverted and reflective. Marketers, in contrast, are creative, enthusiastic, extroverted and interactive. “The good news for marketing is that lawyers are a quick study—you don't have to do a lot to teach them,” he said at a recent conference.

The six traits that distinguish lawyers:

Skepticism: lawyers have a 90% score for this trait, where as the general public scores on only 50%. “It's a very useful trait to have -- questioning data, people and information. These are people who will say “Oh yeah? Prove it.” That's what people hire lawyers for. We're all born to be trusting and we learn to be skeptical. People who don't have this trait drop out and go into other fields, leaving a higher concentration of skeptics in the legal field,” Richard said.

Autonomy: Lawyers have an 89% score for this trait, while the general public scores only 50%. “A person with this trait says, ‘I don't want anyone giving me orders or telling me what to do.' When you try to influence the behavior of lawyers, there will be a natural reaction against that. The best way to overcome ‘autonomy resistance' is to let the lawyer have input in what they're going to do. Let them shape their own destiny. Participation leads to commitment.

Sociability: Lawyers score only 7% on this trait, compared with a 50% score by the public. “I think a block of wood has 8% sociability,” Richard joked.

“This is the ability to initiate new emotional connections, being interested in disclosing your inner life and remembering the details of others' inner lives. It makes lawyers avoid anything touchy-feely. They won't talk about anything personal – instead they'll talk about sports, current events and recent Supreme Court case. Marketers are fighting a large discomfort zone with this trait,” he said. Among rainmakers, in contrast, 25% have the sociability trait; they were sociable and made rain.

Abstract Reasoning: As expected, lawyers score 82% for this trait compared with a 50% score for the general public. “Lawyers like solving the problem, facing challenges and stimulating the brain. Lawyers are proudest of this trait.”

“One downside is paralysis by analysis,” he said. Lawyers love to plan about business development but hate to act. The other downside is lawyers will challenge something because it's fun, even though it may destroy a conversation. “I call this problem ‘drilling hole in your own boat.' Someone will suggest an idea, it will seem good to the group considering it, but then one partner will say ‘I think this would be a bad idea because…' and the boat starts sinking,” he said.

Richard said the best way to get lawyers to stop challenging ideas is ‘pre-mismatching.' Instead of saying ‘to be effective in your practice you should meet with certain clients,' it's better to say ‘here's an idea, I'm sure you won't like it and probably will shoot it down, but why don't you meet with certain clients.” The lawyer will challenge your assumption and say, “no, don't think I'll shoot it down. Let's talk about it.”

Urgency: Lawyers have a 71% urgency score when taking the test, compared with a 50% score by the general public. “This is a need for closure and a need to have things brought to a head. These people like to finish other people sentences. A lot of marketing people are like this too. Urgency moves matters and gets things done,” Richard said.

“However, urgency means a lawyer will not be good at communications. You can't be efficient in a relationship. You can't say, ‘I see you're having a mid-life crisis, I've got three minutes until my next appointment. Tell me all about it.' It makes the other person feel they don't matter to the lawyer,” he said.

Resilience: Lawyers scored low -- only at 30% -- in contract with the general public, which scored 50% for this trait. “Resilience is resistance to criticism. A door-to-door sales person is high in resilience,” he said. “Low resilience people deflect things, saying ‘let's put that point aside.' They use denial, saying “I didn't do that.” They also counterattack, responding with “stop criticizing about me, what about

People with low resilience have difficulty dealing with anything that could lead to rejection. “Give them warm leads: opportunities to sell services where people who will say ‘no' have been weeded out,” he said.

He suggested lawyers should try selling in groups, because group members support each other and this dissipates the pain of rejection. Helping a lawyer become aware of their low resilience is also helpful.

Traditional rainmakers have five key traits, according to Richard:

Using the Meyers-Briggs definitions, the main type for lawyers is INTJ. It is five times more common in lawyers than general population. These personalities want information quickly and to the point, want to improve big picture systems, are skeptical, want to find out the answers themselves and are driven to get results

In contrast, the most common types for marketing people are:

ENFP – extroverted, a personality who is a jack of all trades, lives for the moment and is “A.D.D.” “They say, ‘please let me learn to focus on one thing – oh look! A bird!'” Richard joked.
ESFJ – someone who likes to serve people by mastering specific details, who likes to manage big events that are people-oriented, is extroverted, focused on getting the details right and wants things done on deadline.

Marketing people are extroverted feelers: they are focused on people and being connected to others. Lawyers are introverted thinkers. “So we have a problem. What marketers are most happy doing will be biggest turnoff to lawyers. If you marketers can get into an introverted thinking mode -- providing information in writing and not verbally, providing information that is logical – you will be much more successful,” Richard said.

What marketers should do: Know your own personality style so that you can understand how different people relate to the world.

This post is so informative and rings true with intuitions about lawyers’ general strengths and weaknesses. I write about lawyers’ listening skills at www.listenlikealawyer.com and hope to blog about the listening aspects of some of your points. Thank you for this post.