Report: Winning New Business in a Competitive Market is Still a Challenge for Law Firms

Winning new business and getting more work from clients is a challenge facing law firms today, in a market that attorneys describe as "competitive" and "very competitive."

"In a flat market, winning new business often means taking market share from another firm – a pitched battle. By contrast, conventional business thinking finds it is usually more profitable to sell more services to existing clients than it is to acquire new ones," says a new report, the 2017 Aderant Business of Law and Technology Survey.

54% of respondents said the market for legal services is competitive, and 44% said it was very competitive. A total of 112 respondents (including C-suite executives, financial or accounting staff, and IT personnel) from US law firms completed the survey, which was conducted online in June 2017.

"Most firms see other firms as the chief rival but law firms also see clients, who have been taking work in-house over the last few years, as a significant source of competition," the report says. 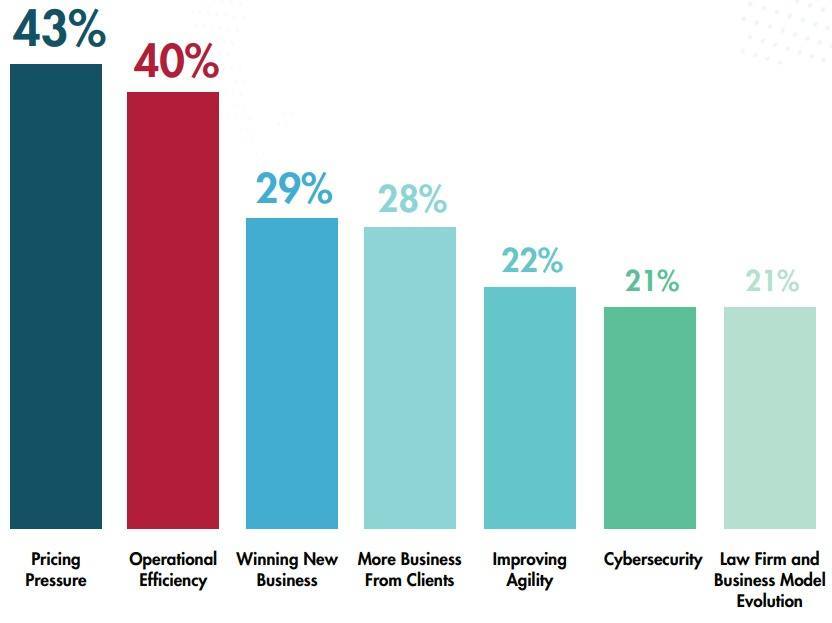 That said, the top challenges were pricing pressure and operational efficiency. "The two are inextricably linked given time in legal services, is often synonymous with money," Aderant found.

Outside counsel guidelines from business clients have grown in size, scope and complexity. "A 40-page document from corporate counsel addressing what it will, and will not, pay for is common."

"More than half cite the sprawl of complex and lengthy outside counsel guidelines and the proliferation of e-billing technology as the most difficult aspects of law firm billing. The amount of time it takes to get an invoice through the pre-bill process varies, but the largest group (37%) said it requires 1-2 weeks."

More than 90% said their firm spends too much time during the billing and invoicing process.

E-billing systems often trigger invoice rejection notices based on certain words in billing narratives. "Some of the commentaries suggested that writing time-entry notes has become a skill, or a game, to avoid setting off a billing alert."